Worst Coral Death Strikes at Southeast Asia
Here's an excellent article that I found in the ARC Centre of Excellence in Coral Reef Studies. "Worst Coral Death Strikes at Southeast Asia." ScienceDaily 21 October 2010.
It gives a good explanation and insight in the current coral bleaching that I blogged already about in May and July;
International marine scientists say that a huge coral death which has struck Southeast Asian and Indian Ocean reefs over recent months has highlighted the urgency of controlling global carbon emissions.

Many reefs are dead or dying across the Indian Ocean and into the Coral Triangle following a bleaching event that extends from the Seychelles in the west to Sulawesi and the Philippines in the east and include reefs in Sri Lanka, Burma, Thailand, Malaysia, Singapore, and many sites in western and eastern Indonesia.

"It is certainly the worst coral die-off we have seen since 1998. It may prove to be the worst such event known to science," says Dr Andrew Baird of the ARC Centre of Excellence for Coral Reef Studies and James Cook Universities. "So far around 80 percent of Acropora colonies and 50 per cent of colonies from other species have died since the outbreak began in May this year." 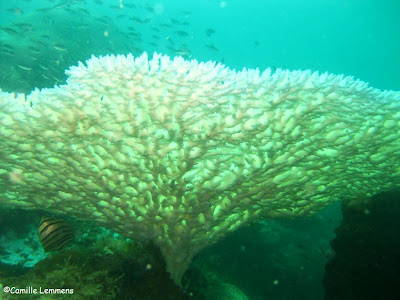 Coral bleaching around Koh Tao
This means coral cover in the region could drop from an average of 50% to around 10%, and the spatial scale of the event could mean it will take years to recover, striking at local fishing and regional tourism industries, he says.
The bleaching event has also hit the richest marine biodiversity zone on the planet, the 'Amazon Rainforest' of the seas, known as the Coral Triangle (CT), which is bounded by Indonesia, Malaysia and the Philippines.
"Although the Coral Triangle is the richest region for corals on Earth, it relies on other regions around its fringes to supply the coral spawn and fish larvae that help keep it so rich," Dr Baird explains. "So there are both direct and indirect effects on CT reefs which will affect their ability to recover from future disturbance."
"Also the reefs of the region support tens of millions of people who make their living from the sea and so plays a vital role in both the regional economy and political stability. For example, in Aceh, northern Sumatra, where the bleaching is most severe, a high proportion of the people rely on fishing and tourism for their livelihoods. While it may take up to two years for some fish species to be affected by the loss of coral habitat, fisheries yields will decline and this combined with a drop in the number of SCUBA divers visiting could have major long-term effects on the local economy." 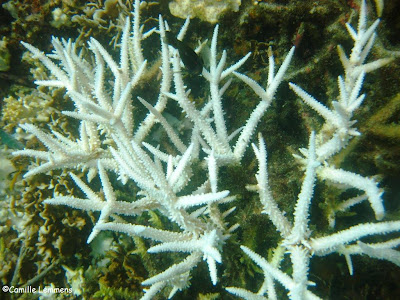 Coral Bleaching around Koh Tao
The cause of the bleaching event was a large pool of super-hot water which swept into the eastern Indian Ocean region several months ago, shocking the corals and causing them to shed the symbiotic algae that nourish them, thereby losing color and "bleaching." If the corals do not regain their algae they starve to death.
According to the National Oceanic and Atmospheric Administration's Coral Hotspots website, sea surface temperatures in the region peaked in late May, 2010, and by July the accumulated heat stress was greater than in 1998. Local dive operators recorded water temperatures of 34 C, over 4 degrees higher that than long term average for the area.
The event was first detected on reefs in Aceh by marine ecologists from Wildlife Conservation Society, CoECRS and Syiah Kuala University. They already rate it as one of the worst coral diebacks ever recorded.
"My colleagues and I have high confidence these successive ocean warming episodes, which exceed the normal tolerance range of warm-water corals, are driven by human-induced global warming. They underline that the planet is already taking heavy hits from climate change -- and will continue to do so unless we can reduce carbon emissions very quickly. 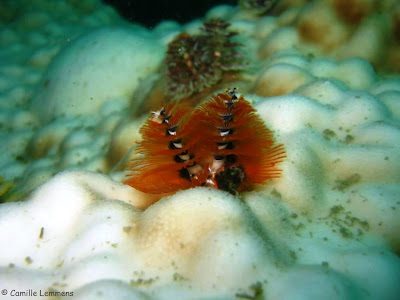 No White Christmas here but a Christmas Tree on bleached coral at Chumpon Pinnacle in the Gulf of Thailand
"They also show this is not just about warmer temperatures: it is also threatening the livelihoods of tens of millions of people and potentially the stability of our region."
Dr Baird said it was not yet clear whether Australia would suffer a similar coral bleaching event this year: this would emerge only with the arrival of warmer waters from the north in January/February 2011. The previous worst events to strike the Great Barrier Reef were in 1998 and 2002 when over 40% of the reefs along the length of the GBR were affected.