Vintage Scuba equipment revisited
It's been a while since I last posted something about vintage scuba, back in march this year.
There are still a few pictures that I have floating around on my hard disk on vintage scuba equipment that I think are worthwhile checking out;
A weight belt from the Mid 1950's Mer-Man weights and weight belt. These were sold by Amerman Divers Supply out of Portland, Oregon. The belt buckle is a special aircraft corrosion-resistant safety buckle - a slap of either hand and the belt drops.

A Voit tank and Voit Viking fins, with 40 cubic foot Voit tank and blue oval mask. Scuba gear manufactured by Voit was used extensively in the TV series Sea Hunt, circa late 1950's to the early 1960's. This picture is gratefully used with credit to vintagescubasupply.
Voit bc Horsecollar BC's gained popularity in the mid-1960's, for more precise buoyancy control. The unusual Voit BC was made in a military green color, almost identical to the shade used by the US Navy. 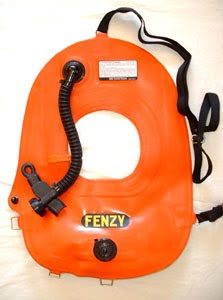 Fenzy1 is probably the most famous horsecollar BC and the most sought after by collectors. The Fenzy featured a built-in air bottle that inflated the vest by simply turning on the valve. This late model unit is probably from the 1980's.
Have a look at this pdf file about the history of bcd's, it's fun and the Fenzy 1 features as well in it. 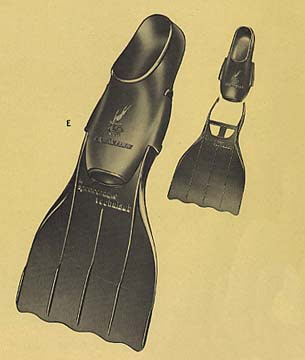 Detachable fins, not a completely new idea, these pictures come from somewhere in the 6'tees.
Hope you enjoyed this pictures and information.
Camille