Dive safaris and live aboard report Maldives March & April 2010
This is the first guest blog writer entry of my dive blog. Please welcome Bas van der Mee, owner of a live aboard company in the Maldives and one of my former IDC candidates during August 2007.
This blog post is going to be part of guest write ups by former students who are still active in the dive industry, so anybody who completed his IDC with me and who's still working in the dive industry and feels like writing a small entry, get in touch!
Bas can be reached at his Dutch and English websites and on his Facebook group. Here we go, enjoy the read, I did;
After doing an IDC in 2007 with Camille,I worked on Koh Samui for several dive schools like SIDS, Blue Planet and Divepoint. After staying in Thailand for a year I went to the Perhentians in Malaysia and worked for a dive school called Universal Diver. Then a fantastic opportunity crossed my path: an old friend of mine asked me if I wanted to take over his safari company in the Maldives. Here’s a short story of the safari period in the Maldives we just closed.

Rain, wind, hail, the weather here in the Netherlands is very different than what I got to experience the past few months. I did found it a fantastic safari period which I want to share with you. I want to thank all guests who made this period to a success and I hope you had just a great a time as Christian (dive partner of Bas and also a former IDC candidate of mine) and me.

At the beginning of March I got on the Blue Dolphin in the Maldives after a winter of snow. The magnificent Indian Ocean was fantastic and familiar again. After a few days arranging logistics I picked up Christian and the adventure was about to start. The weather was great, we had no wind and it was very warm. This made it possible to dive according to the plan and we could use the less secured anchoring places and reach the best dive sites.

Maldives map
Because of the east wind (east monsoon) the manta rays were on the west side of the atolls so we left immediately for the South of the Ari Atoll to go up on the West side. The third day we arrived at Maamagili in the South of the Ari Atoll where we discovered they were working hard on the new international airport which is supposed to open in 2011. Because they were dredging there was a lot of debris in the water what might have been the cause that we saw not as many whale sharks like we are used to this season.

This was obviously not to spoil the fun because at Madifaru we came across some beautiful mantas and I had the opportunity to test my HD camera.
Unfortunately the fun for me didn’t last for long, a flooded underwater housing soon made short work of the camera....

After an always spectacular night dive at Maaya Thila where we saw white tip reef sharks, moray eels and stingrays hunting we sailed back through the South Male Atoll back to Male. Some of our guests had terrible storms last November and it was a relief for them to see that the Maldives can be sunny. Fortunately, the weather throughout the whole safari period was very good and sometimes people even secretly longed for a couple of showers. 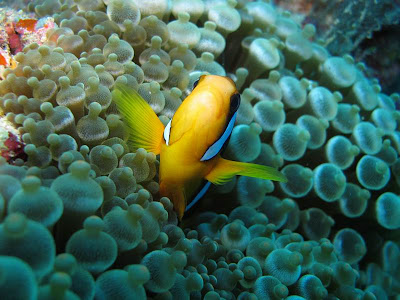 Anemone fish (© at Bas van der Mee)
The next safari we got to welcome the members of the diving school De Beldert who had booked the boat.
Since the weather was perfect we could quickly sail go to the south of the Ari Atoll. Again they were working on the airport and again there was a lot of debris in the water. However, we were lucky and a few people who were quick enough to get in the water had the opportunity to snorkel with a whale shark for a brief moment.

At Madivaru we saw the manta rays again and as an experiment we made a dive on a new dive site where I saw 3 safari boats lying the season before.
After some Internet research and help from Google Earth I obtained the GPS coordinates. The dive site is called Aiyabu Thila and is near the island of Mandu in the south of the Ari Atoll. We were astonished when a dozen gray reef sharks accompanied us during the dive and we could end the dive on top of the fabulous Thila which was covered with beautifully intact hard coral. See among others the photo of the young parrot fish. Aiyabu Thila is definitely a dive site I would like to visit more often! 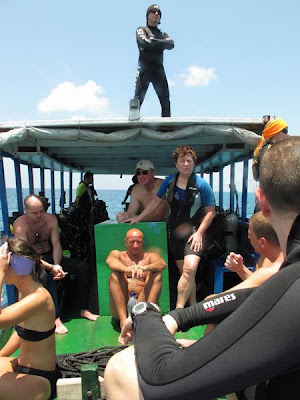 Bas on the look out for whale sharks
The next day we wanted to go see the manta rays at Donkalo Thila. This is a difficult dive site because of the lack of protection when there is a serious current. You just get flushed of the Thila. We had a perfect drop on the Thila and together with a quick descend this made this dive a fantastic dive for some of the guests with a spectacular sight on dozens of mantas. As Christian and I went further downstream to pick up the divers which were flushed of the Thila we unfortunately saw none, but safety first!

Back in Male Christian tried to buy fresh tuna at the fishing boats but his skin color made tuna suddenly 3x more expensive than normal. Fortunately, the captain knew somebody on a fishing boat and so we found a way to buy some fresh tuna for the next trip.

The third safari, we again tried to find whale sharks at Maamagili but we saw none when there are normally 4 or 5. Because of the little luck we had with whale sharks this period we decided not to go all the way to Maamagili anymore for the upcoming safaris. This due to the fact that it is a long way sailing and we miss out on some other great dive site. 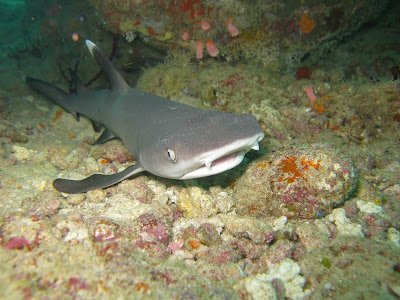 Sleeping baby white tip shark (© at Bas van der Mee)
Since last year, it is forbidden to trade in shark products in the Maldives and effectively this means excellent protection of the sharks. The big numbers of white tip reef sharks and pregnant females we have seen already seem the positive outcome of new laws. At this rate there will be large numbers of sharks again on all dive sites within 5 years. 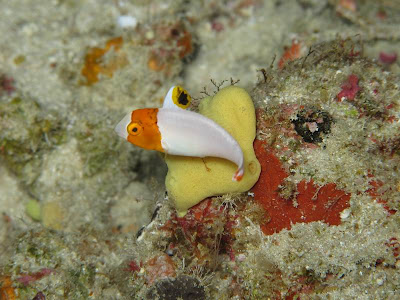 Baby parrot fish (© at Bas van der Mee)
During the third safari we had no luck at all because this was the first safari in our history (of 31 safaris) in which we saw no mantas! We dived Madivaru 3 times and while we saw them on all previous dives at this site now there were none. Another group of divers who surfaced 10 minutes after us saw 2! Later this proved to be exactly the week that the mantas were migrating and next week they arrived on the east side of the Maldives at Lankan Finolhu close to Malé, three weeks earlier than normal! 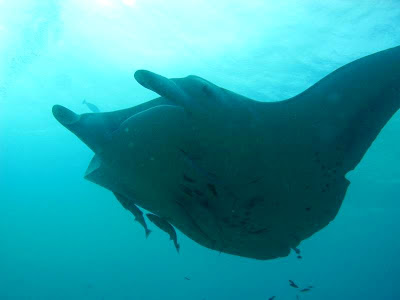 Manta Ray
Because we decided no longer to go to the south of the Ari Atoll now went to the Rasdhoo Atoll in the North of the Ari Atoll where whale sharks are also seen regularly. In the lagoon of the Ravesteyn we did not see them but at Rasdhoo we saw a whale shark accompanied by a couple of gray reef sharks!

We had more bad luck.... who would have thought that a volcano could affect our safaris, most divers in the last safari could not make it in time and we had to change our schedule to show them anything of the Maldives. Because of this we did a lo of dives in the North and South Male Atoll with many sharks and eagle rays but unfortunately we could not cross to the Ari Atoll.

During all safaris there is a big chance to see manta rays, sharks, turtles and other big game, but especially during the longer safaris, there is more time to wait for the good conditions to spot whale sharks which increases the chance of spotting this great animal.

Because it appears that the whale sharks at Maamagili are disappearing in the high season we go in search of their new residence. A place where we expect them to find is Hanifaru Bay in the Baa Atoll, a place where National Geographic made a documentary about and where in the west monsoon (June until November) and under the right conditions up to 200 mantas and 20 whale sharks can be seen. This autumn we are going there with a bigger, stronger, faster and more luxurious boat, the Dhinasha. There are still some places available and if there is enough interest we may open another period in September!
Check for availability at our schedule.
See you in the Maldives!