Today we completed day # 1 out of two days of wreck diving in Pattaya for the Instructor Wreck Specialty rating. The travel party is big this time and consists of Grainne and Rob who just completed the IDC in February and Preben who completed his IDCS in February. There are also Nigel and Thomas who completed their IDC last year, respectively in November and December. 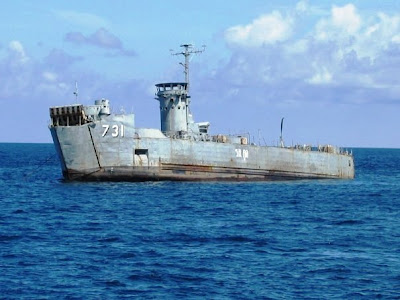 HMS Koot on the surface just before it's being sunk

After the two days of wreck diving near Pattaya's near islands on the HMS Koot, there will be a third day of wreck diving in the form of an exploratory trip. One wreck will be of a Navy Patrol boat and two marks are new and we will explore them. We could be diving a heap of stones or a beautiful wreck. Very exciting to explore uncharted waters. The captain gets these marks of other fisherman boats or captains because these are locations where they keep losing their nets. 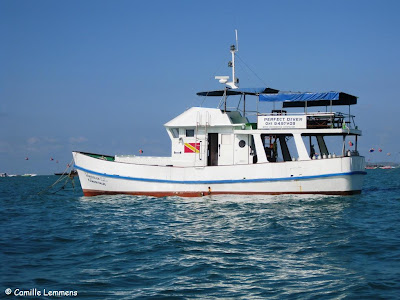 This is the boat that we're using for these days, owned by Andrey, a Russian dive store owner in Pattaya who brought this boat down to Pattaya all the way from Wladiwostok over South Korea straight into Pattaya. That must've been quite a voyage. The boat is build in Poland by the way and has an iron hull, in contrast to almost all or most dive boats used in Thailand! 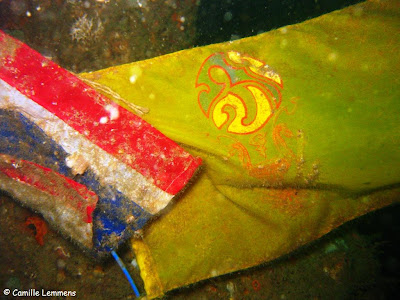 On the HMS Koot, at the aft buoy one can find these two flags, the Thai national flag and the King's flag. Nice touch and well done to whomever put down those two flags. I like it! 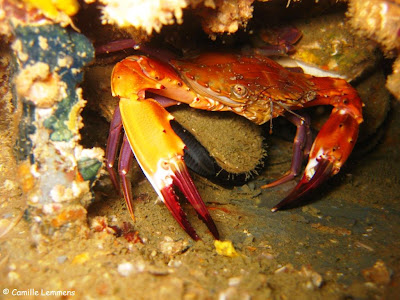 There's also plenty of marine life on this wreck site but not as much as it's sister ship the HMS Khram. This crab looks beautiful though and we encountered some very big puffer fish as well, besides schools of juvenile barracuda's and plenty of more fish. 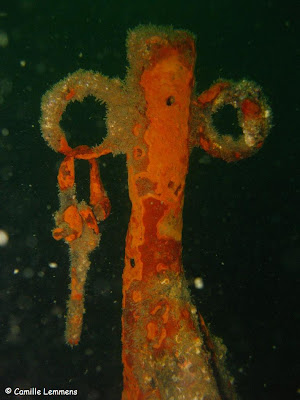 The other specialty we completed today was an Instructor Drift dive Specialty although the current wasn't too strong.

More diving is coming up tomorrow, so stay tuned for more updates.