Testimonial by Jack Alexander of the April 2015 PADI IDC in Khao Lak, Thailand

Testimonial by Jack Alexander of the April 2015 PADI IDC in Khao Lak, Thailand

It took Jack a while to rite this testimonial, but there's a very good reason, explained in the actual testimonial, which you can read below the picture. During the April 2015 PADI IE in Khao Lak, Jack had a problem with his open water presentation and needed to do that segment of the PADI IE again.
His problem however, was that he needed to go back home to the UK and take a next PADI IE in the UK. In order to be able to participate, he took the PADI dry suit specialty, so he could join a PADI IE program in a quarry in the UK. He did that and nailed it the second time.
We stayed in contact the whole and I made sure he was as prepared as possible, although we were worlds apart, me being in Thailand and Jack being in the UK.
He managed though and passed the PADI IE,

Receiving his testimonial yesterday, was a very pleasant surprise and the reason he gave his brilliant. Much appreciated Jack! I hope you will enjoy teaching for many years to come! 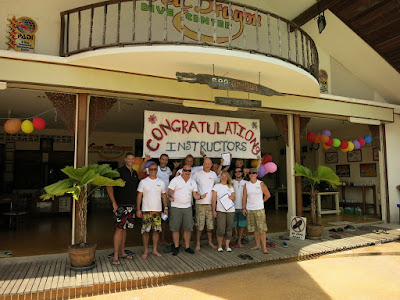 Nearly Two years ago is when I started my IDC with you in Khao Lak, an experience that I will never forget. And now, after acing my IE in a slate quarry, Dry Suit equipped, in near freezing conditions, you were still there for me, to mentor me and give me the confidence I needed to succeed after not completing my IE in 2015. Now you might wonder why I chose to write this testimonial to you now. the truth behind this is, I wanted to write something that would have time behind it, experience in the field as an instructor, so that I might be able to look back with clarity and truly appreciate all you had done for me. To this day your voice rings clearly in my head whenever a student has a question, a concern, or tells me wide-eyed about a new fish they have seen or about their fears of the open ocean being conquered. Every time I teach I think of how you taught me, with patience, guidence and good humor in full swing. You've been my inspiration as an instructor, and no matter where I go I will always take that inspiration with me, so that I might inspire others to follow the same path, and to pursue their passion for diving to the fullest, as you have helped me to do so. Thank you so much, you truly are an inspiration. See you down there matey. Cheers

See you there,
Camille