Yesterday it was time for the bi-yearly underwater clean up of Chaweng beach sponsored by the Thai Hotels Association - Southern Chapter East Coast's Green committee under supervision of Khun Jultamart and Khun Praesert supported by the Green divers Association of Samui organized by Camille Lemmens.
With 13 divers and one land based safety and supervision person, it was another nice turn out. 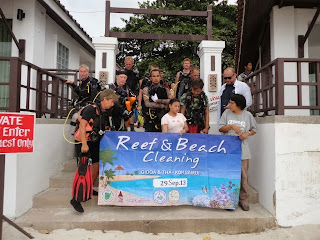 Before the clean up

In contrast to earlier this year, the visibility wasn't that great but there was still plenty of trash and debris to be found and collected although not as much as last time, directly after the rainy season. 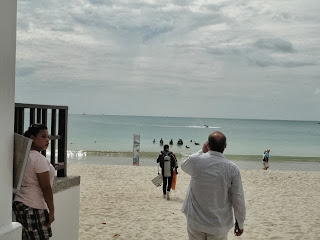 Waving bye to the group of divers

The clean up was well organized and the Tessabaan was waiting for us when we got out of the water to collect the garbage.
The most collected items were glass bottles and plastic bottles but also many pieces clothing and fake sunglasses were among the collection we picked up.

After the clean up, Poppies Resort in Chaweng sponsored once more a lunch.

Many thanks to the Thai Hotel Association -  Southern Chapter East Coast's Green committee, Khun Jultamart and Khun Praesert, Mr. John Ens and Poppies Resort, Tessabaan, Stuart for the tanks, Max for the bags and everybody who showed up and helped out! 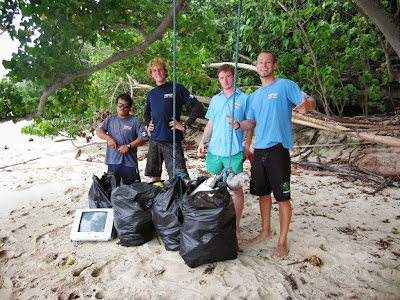 The same day, staff of '100 Degrees East' coordinated a clean up to take place simultaneously at the National Marine Park 'Ang Thong' and they collected 10 bags of waste including a discarded TV set. Thanks for the effort guys!

See you all again for the next clean up come April 2014.