PADI IDC on Koh Samui for July 2011 kicked off

PADI IDC on Koh Samui for July 2011 kicked off
The second of a row of four 'back to back' IDC's has kicked off and this time it's after the successful IDC on Gili Air in Indonesia with Oceans 5, a 'home' game on Koh Samui. There are 5 IDC candidates taking the challenge; Steve, Stacey, Lorne, Leslie and Frank. 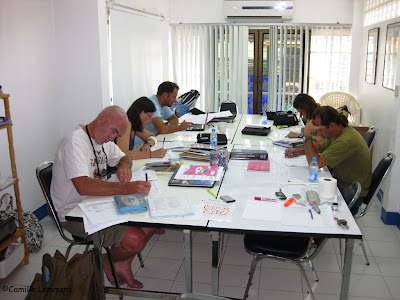 All five of them during the first set of theory exams
It's the first time that I teach an IDC at the classroom of the local hyperbaric chamber, since the group is too big for the classroom I usually conduct the local Samui IDC's at.
Stacey was already run off her bike, but she's fine and 'taking it like a real man' as she states, so good luck to her and also to Frank, who did his last DM work 6 years ago, go get them Frank!
Keep your eyes tuned in for more updates on this IDC!
If you're interested in participating in one of my PADI IDC's, the next one is scheduled to start in Osan, South Korea, starting 20th July, to be followed once more by another IDC on Koh Samui, starting 7th August which in urn is followed by an early September program on Koh Phangan, directly followed by an additionally scheduled IDC on Gili Air in Indonesia, starting 15th September. . A busy schedule ahead so don't miss out! All of these IDC's have confirmed candidates, so hope to see you there!
Camille