MV Trident has been sunk off Koh Tao

MV Trident has been sunk off Koh Tao
Yesterday the MV Trident has been sunk West off Koh Tao's Shark Point. Earlier this month I posted about the plan of sinking the MV Trident, and yesterday it was the right time to do it!
Jamie Macleod, one of the owners and my former Course Director, back in the days, was just back in time on Koh Tao from the UK so everything was in place to execute the sinking. 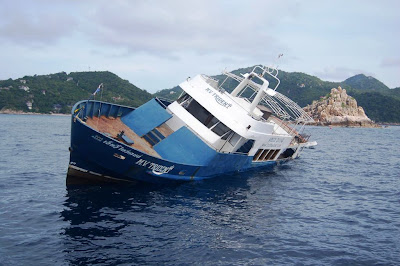 After a safe journey from Chumphon where she had been prepared for sinking the final jobs were done and she was ready to go to her resting place, West off Shark Point, South of Koh Tao. 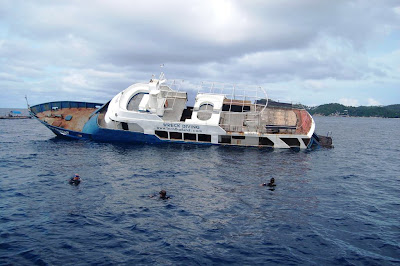 They had welded the hatch that gave access to the accommodation section closed as it was very narrow and was a possible risk. The air pressure being forced out of the boat in the vertical position caused the welds to fail in a spectacular fashion as seen in the pictures. 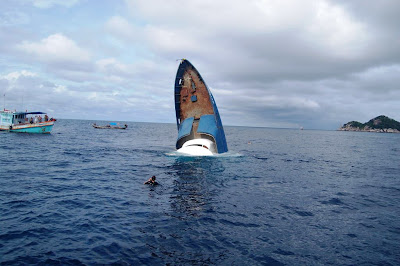 There was a lot of speculation on just how she would go down as none of us had done this before. Initial thoughts was it was going to turn turtle and sink but before she she did she just sat vertical and slid slowly down. 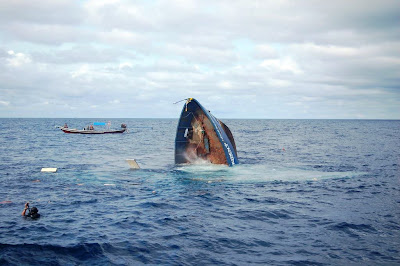 After sinking she settled on the bottom in a vertical position and there was fear that she was going to stay in this position but after around 3 minutes she slowly settled to the sea floor at around a 30% lean to starboard. Once the sediment that was kicked up settled we recovered the video cameras and attached a buoy line and Koh Tao has a great wreck to dive. She is sitting in 36 metres to the bottom and the deck and saloon are at around the 25 metre level. It has good penetration to the saloon and engine room and in time will be a magnet for sea life. 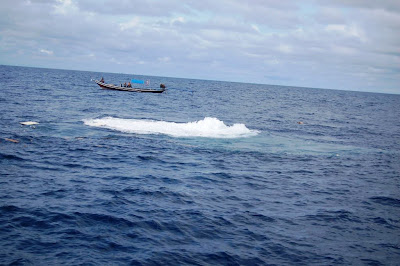 That's all folks!
Thanks Jamie and all other people involved in this project! I'm looking forward on diving this wreck for many years to come!
With thanks to Duncan for pictures and text, who was privileged enough to be there!
Camille