Unexploded ordnance in Thai waters or...In amongst the shells, SHELLS

Unexploded ordnance in Thai waters or...In amongst the shells, SHELLS
During a recent dive at Sail Rock, I saw for the first time in 11 years of diving and well over 450 dives at this location, an unexploded shell or UXO (unexploded ordnance). 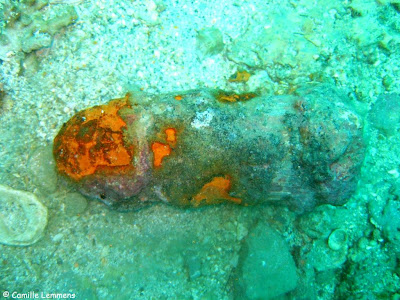 According to Steve Burton of Thaiwreckdivers dot com, the UXO is likely the remains of a large 155mm shell fired from a Thai ship during the live firing exercises that are occasional held at Sail Rock.

The corrosion on the shell indicates that it has been down underwater for many years and the brass rifling ring is clearly visible, confirming its origin as an artillery piece.
It was probably about 30-35 cm long and about 10 cm in diameter. 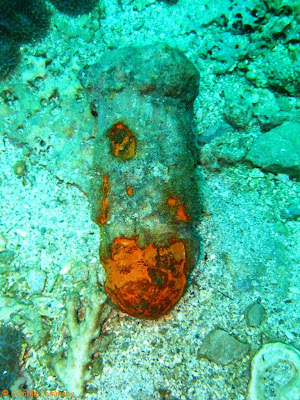 Silly enough, after recognising what it was, I tried to lift it and my first impulse was to take it out of the water. DUH! Silly boy! First of all it exceeded my expectation of how much it weighed, it was darn heavy and I could barely move it around, which in hindsight is a very good thing.
Immediately after having touched it and having realised how heavy it is, I also remembered Steve Burton's web page dedicated to DANGEROUS STUFF FOUND ON SHIPWRECKS AND REMOTE DIVE SITES EXPLOSIVES or...In amongst the shells, SHELLS and decided it a better idea to leave it where I saw it!
Please visit this page and learn from it!
Funny thought though how many times myself and all other divers have swam/dived over this ordnance without knowing or recognising it. 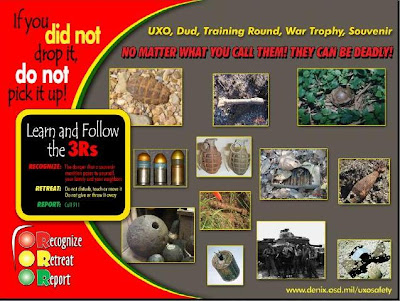 Main US Military UXO Web Site - For Information, Poster, study documents (be patient with this rather slow secure web site)

Steve also remembers seeing a couple of these 155mm shells rattling around in between the coral heads just a few meters underwater at Sail rock many years ago – confirming the observations that they are being heavy to lift – though he guesses that this prevents them being lifted out of the water, which is a good thing, since when they dry out, they can become a bit unstable according to Steve, percussively sensitive and explode killing everyone within a few 10’s of meters.
Thus its best to leave it where it is and visit Steve's web page dedicated to DANGEROUS STUFF FOUND ON SHIPWRECKS AND REMOTE DIVE SITES EXPLOSIVES or...In amongst the shells, SHELLS.
A very interesting dive it was indeed and once more it proofs that you never cease to learn new things!
Be safe out there folks,
Camille