Here's my last sequel of pictures from my Similan diving trip, have a look at reports # 1 and # 2 to see some more pictures.
During my dives I had some problems with my camera so I'm not happy with a lot of the pictures that i took, since the function buttons didn't work under pressure! There were a lot more macro shots that I would have liked to take. 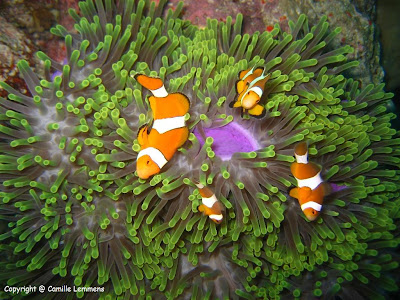 This shot of some Western Clown/Anemonefish worked out fine though at Barracuda Point, island # 6. Sometimes the not so desired actually turns out good, as with this shot, a rare occasion.


This small lobster picture came out ok but I would have loved to take some macro shots of this little fella, he was bravely looking out into the world, not at all impressed by me and my camera antics. Impressive! This was shot at Breakfast Bend, island # 9, a real nice reef dive. 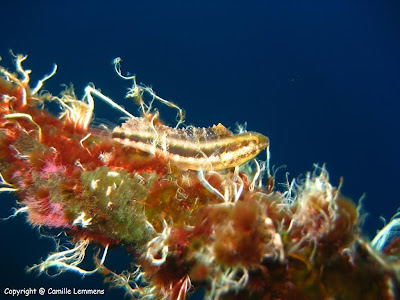 During the safety stop at Boulder City, this Lined Blenny was hanging out at the descent/ascent/buoy line and I got some good pictures in. This was one of the rare occasions where the camera didn't work properly during the dive but worked fine again at shallower depths. 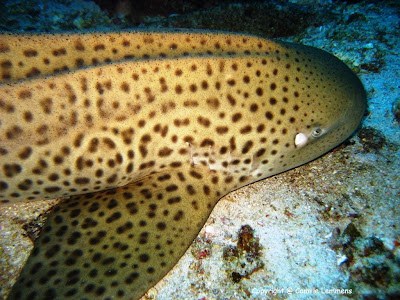 There were also a few sharks on the menu during my dives, a couple of close up encounters with leopard Sharks, as pictured above, this one was seen at Boulder City and there were plenty of sleeping Leopards on the bottom of the ocean, sometimes at very deep depths, like around 40 meters. During my first dive at the Similans this year, at a site named Deep Six, we saw two White tip reef sharks.
There were no real big pegalics came my way during this trip, no whalesharks and no Manta Rays. The supposedly best place to see them is at an island a little bit north of the Similans, named Koh Bon. We did three dives there and all I got to see was a right wing of a Manta going up and down and than it was gone. Ah well, better luck next time!


Here's a lovely shot of an Hawksbill turtle at North Point, island # 9, but my camera didn't work. No flash, thus a very blueish picture.
It was a lovely experience with some excellent diving and once more, thanks to the folks at Similan Scuba Adventures and their staff on the boat, Pan and Nick, the dive guides!
Camille