This surprising header, to me, was found in today's issue of the The Nation, a Thai nation wide English language paper made in Bangkok.

As a long term diver in the Gulf of Thailand, since 9 years and various other parts of Thailand, but mostly in the Gulf, I've seen plenty of Crown of Thorns and they're mean guys. 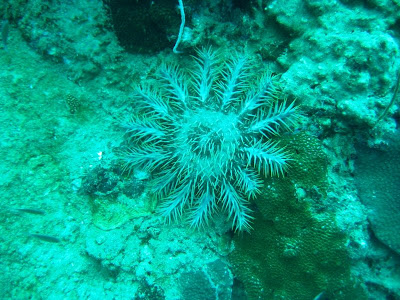 Here's a not so great picture that I made not too long ago at White Rock near Koh Tao. They demolish coral reefs and are very difficult to destroy, if you cut of a piece of them, they basically live on now as two new crowns of thorns. The only way I know to destroy them is to take them out of the water, which is a completely different story, since their stingers hurt tremendously and give you long lasting scars on top of that.
The article in the Nation mentions injections, which is interesting.
Anyway, without further ado, here's the full length article;
Crown-of-thorns starfish are threatening coral reefs in at least three locations, including a popular destination off Phuket. "These starfish destroy natural reefs," says Niphon Pongsuwan of the Phuket Marine Biological Centre.
Damage to the reefs is evident at Aew island off Phuket, the fifth in the Similan chain and another island off Krabi. In an ecologically sound environment there should be just one crown of thorns starfish for every 100 square metres.
"But in these three locations there are more than 30 per square metre," Niphon says.
In a bid to reduce their damage, centre divers are collecting the starfish from Aew and then destroying them using chemical injections.
Niphon is asking recreational divers to alert national park officials if they encounter the starfish.
"Don't destroy the crown of thorns starfish before you notify officials or else you may face legal action," Niphon says.